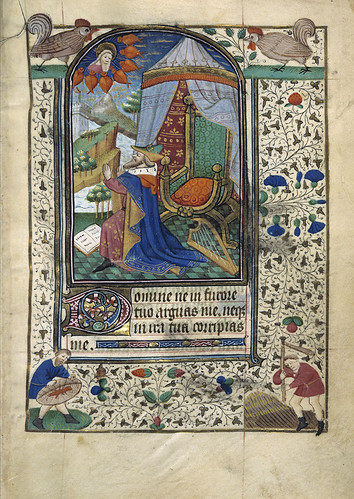 Image by National Library NZ on The Commons
This Book of Hours was copied in Eastern France between 1425 and 1475. Shown here is one of twelve large miniatures, each in a gold frame arched at the top and with three or four lines of text beneath. This miniature shows a richly-clothed King David with his harp lying beside him, and a book of psalms open on the ground in front of him. At the base of the border are an agricultural worker and a man with a scorpio sign; at the top two confronting cocks. Immediately below the miniature is a 3-line initial in red, blue and green with white tracery on a gold ground. The last line of text is completed with a line-filler. This page occurs the beginning of the section containing the seven penitential psalms.

The Book of Hours was a medieval prayer book used by laymen for private devotion. These books were created for both men and women, but their place in female devotion is particularly noteworthy. The text centres on the Hours of the Virgin, a series of prayers to be said at the eight canonical hours of Matins, Lauds, Prime, Terce, Sext, None, Vespers, and Compline.

shooting against the wind 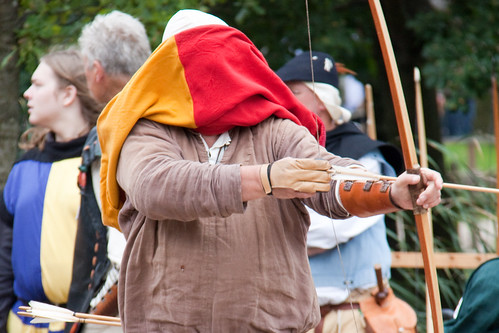 Image by hans s
is difficult with these medieval clothes 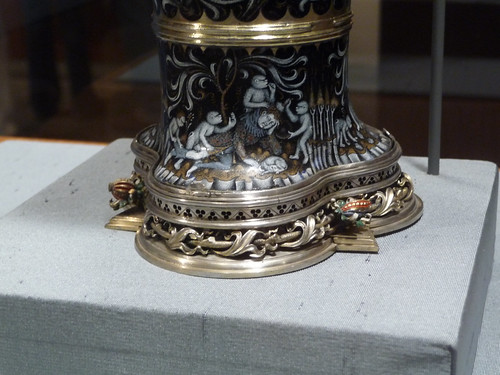 Image by feministjulie
Beaker with Apes

One of the finest surviving examples of medievalenamel created for a princely table, this beaker illustrates a popular legend that remarks on the folly of man: the peddler who is robbed by a band of apes as he sleeps. The peddler, seen just above the base, fails to stir as the apes strip away his clothes. Other apes, having taken his goods, cavort in the branches overhead. The beaker originally had a cover. The unusual grisaille enamel technique is found on several other surviving objects, all of which have been associated with the court of the dukes of Burgundy.